We are so proud to have the opportunity to serve the communities that make up Southeastern Illinois.

We understand that many of the individuals and the families we work with come from a background in farming and agriculture, and we thank you for working tirelessly to bring food directly to our tables. With farming, there are many hazards that must be considered to maintain a safe work environment. One of these is excess noise exposure. Many farmers do not immediately think about loud noises as a danger to their health, however, the sounds that farmers are exposed to on a daily basis in SE Illinois have the potential to cause permanent and irreversible hearing loss.

A study recently published in the US National Library of Medicine aimed to evaluate the connection between farmers and an increased risk for hearing loss. The study compared the hearing sensitivities of farmers who were only exposed to noise at work (did not often participate in noisy leisure activities such as concerts or sporting events) to peers who had jobs where they were not exposed to noise.

Each farmer was matched with a non-farm worker who was their same age within 6 months. Once matched, all of the participants were separated into three groups by age, the 30-year group, the 40-year group and the 50-year group. The researchers then gave each participant a hearing assessment and the results were quite shocking.

It is clear from this study and from many others exposure to the daily noises regularly associated with farming can cause significant damage to your hearing.

What Aspects of Farming in SE Illinois Cause the Issues?

In the US in general and SE Illinois specifically, farmers are consistently exposed to noise. A recent study found that 92% of American farmers were exposed to dangerously high noise levels, 78% experienced hearing loss and only 4% of these actually used hearing aids. 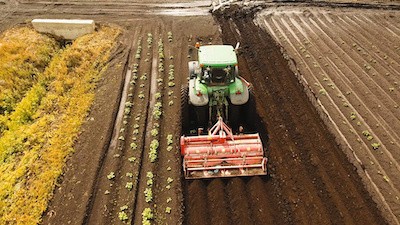 Some examples of machines and processes that are making a whole lot of noise are as follows:

There are some less obvious noise exposure risks as well. For example, blasting music while in the tiny confounds of an enclosed piece of farm equipment can also cause damage to your hearing. A good rule of thumb is if you need to raise your voice in order for someone to hear you who is standing 3 feet away, the noise is too loud and could potentially cause hearing loss.

How to Protect Your Hearing While Farming

There are many precautions farmers can take to protect their hearing.
- Absolute Audio
— ,
X