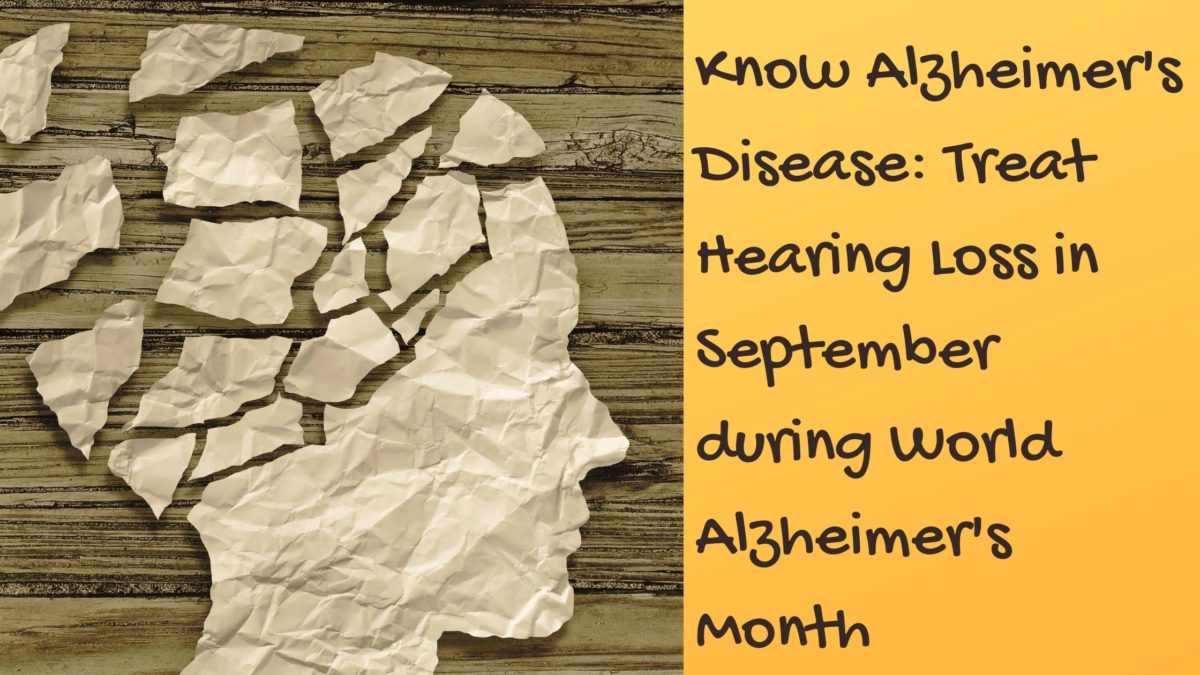 As we say goodbye to the summer, it’s time for World Alzheimer’s Awareness Month in September. Our commitment is to hearing health and treating hearing loss brings significant benefits to one’s life including our brains. Recent studies have indicated that treating hearing loss could also support brain function and potentially reduce the risk for developing dementia – and Alzheimer’s disease.

Alzheimer’s disease is the most common type of dementia that people can have. The disease most frequently affects older people (typically over the age of 65). The National Institute on Aging writes that the “number of people with the disease doubles every 5 years beyond age 65. About one-third of all people aged 85 and older may have Alzheimer’s disease.” Older people are not the only people affected by Alzheimer’s, however. Early-onset Alzheimer’s can affect people as early as 30 years old and The Alzheimer’s Association. Reports that, in the United States, early-onset Alzheimer’s may be affecting approximately 200,000 people who are under 65 years old. There may be several causes of Alzheimer’s disease. They include genetic factors, but also lifestyle and environmental factors.

A degenerative brain disease, Alzheimer’s is most commonly understood as affecting people’s memories. People with Alzheimer’s can find it quite difficult to remember new information, in particular. In the early stages of the disease, this memory loss can look like forgetting small things, such as where they may have just put their keys down. As the disease progresses, this memory loss can be pretty severe. It may take the shape of forgetting people’s names—even close loved ones—as well as an inability to distinguish one person from the following or confusing one person for a different person. Some people with Alzheimer’s struggle with their spatial awareness. They can become easily disoriented, even in tight spaces such as their own homes. They can also become confused about events that are happening right in front of them.

The advanced stages of the disease can affect people’s personalities. For example, those with progressive cases of Alzheimer’s can experience sudden yet lasting shifts in moods, feeling irritable and cranky. They can also have more extreme behavioral changes. For example, some people in the advanced stages of Alzheimer’s disease are pretty consumed with suspicions and paranoia that their family, friends, loved ones, and coworkers are conspiring against them or are out to get them.

How is Alzheimer’s connected to hearing loss?

A recent study conducted by researchers at Johns Hopkins University tracked almost 2,000 older people around the age of 77 for 12 years, some of them for 18 years. They wanted to understand how hearing loss and cognitive decline may be connected, and they found that “people with hearing loss were 24% more likely to have Alzheimer’s,” continuing later by explaining that “the worse the hearing loss was, the more likely the person was to develop dementia.”

With this correlation to hearing loss, it is never too late in paying close attention to the hearing health habits of yourself and your loved ones. Treating your hearing loss may help improve your cognitive abilities and bring other significant physical and mental health benefits.

Are you ready to treat your hearing loss?

Perhaps the first and easiest step you can take toward better hearing health is to get a hearing test. If a hearing loss is detected, our team at Absolute Audio will help you find the treatment option best suited to your needs. The most common form of treatment is the prescription of hearing aids. We offer top-of-the-line hearing devices designed with incredible features to address the many different aspects of hearing loss. If you are concerned about your hearing, contact us today to schedule a hearing consultation.