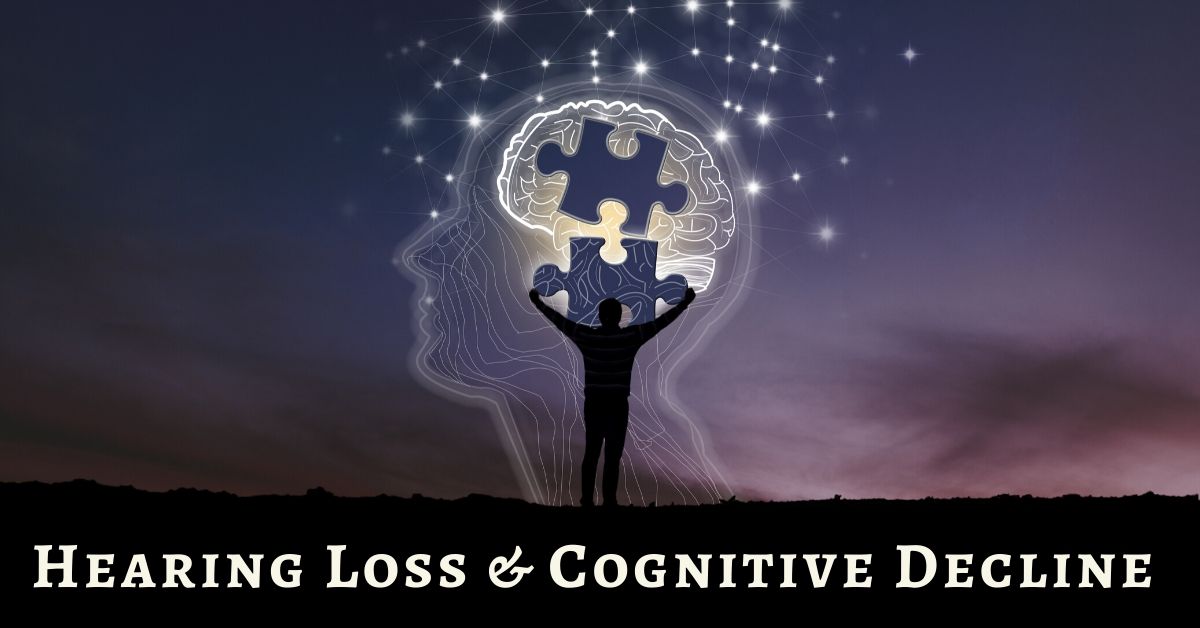 Age-related hearing loss is widespread, impacting about 25% of those 65 to 74 years of age and 50% of those 75 years of age. But perhaps unexpectedly, only 1 in 3 seniors with severe hearing loss are currently seeking care for the disease.

Untreated hearing loss has a detrimental impact on one’s daily life in many respects. Still, studies indicate that there are also significant, lasting consequences that reach beyond everyday life, including your cognitive abilities.

How are hearing loss and cognitive decline related?

Loss of hearing plays a significant part in brain safety and normal functioning. The effect is a significantly higher risk of cognitive impairment and dementia when hearing loss is untreated.

Frank Lin, an epidemiologist at Baltimore’s Johns Hopkins University, is an expert in the connection between hearing loss, cognitive impairment, and dementia. A prospective study performed by Dr. Lin of 1,984 older adults found that those who initially had hearing loss were 24% more likely to experience cognitive decline within six years than their peers with normal hearing.

Their cognitive skills deteriorated faster than those with normal hearing by up to 40 percent. This was displayed in a higher likelihood of problems with brain functions such as thought and memory, developing them three years earlier on average than with ordinary hearing people of their age. And the worse their hearing loss at the beginning of the test, the higher their cognitive decline over time.

“Older adults with hearing loss even when you manage conditions such as diabetes and high blood pressure face an increased risk of dementia,” Dr. Lin said in an interview. “And we believe they are causally related.”

This is not the only research that compares the functioning of the brain with hearing loss. In a study conducted by academics at Manchester University in the UK in 2018, it was discovered that the rate of memory and reasoning decline was significantly slow down after the patient used hearing aids. The effect was drastic–the researchers reported an average reduction of 75%.

In what ways does hearing loss affect your brain health?

Though further work is needed, the impact that hearing loss has on cognitive function can be explained by three possible causes.

Throughout our daily lives, we have many conversations in noisy places. In these environments, we are always forced to devote our full attention to hear and process speech correctly. When tough listening environments are combined with hearing loss, we are forced to use more brain resources to keep up. This leads to an increased cognitive load and mental effort, which has been linked to Alzheimer’s and other types of dementia.

Many individuals with chronic hearing loss continue to become disconnected from outside events and society. It’s embarrassing not to be able to hear a conversation and answer correctly. It’s also troubling not being able to hear to the daily special at a restaurant being addressed by the waiting staff.

People with unexplained hearing loss, therefore, withdraw from their peers and social networks at higher rates. This removes a vital source of social interaction that sharpens your cognitive ability.

The lead author of the Manchester University study mentioned earlier hypothesized that spending less time with others may affect their brain health. A lack of social interaction has long been identified as a factor that may contribute to cognitive impairment.

A third potential reason for the link between hearing loss and cognitive impairment is that hearing loss affects the brain’s structure in a way that leads to cognitive deterioration.

Even mild hearing loss has been linked with a decline in neuronal activity in the auditory cortex and a drop in the amount of brain tissue. According to scientists, this decrease in tissue is not inherently indicative of missing brain cells but may be attributed to brain cell shrinkage caused by lack of auditory stimulation.

What can we do to treat hearing loss?

Technology is continually evolving, and hearing aids have become one of the most reliable ways to help improve hearing. Although there is much work involved in fitting and programming the hearing aids to suit the wearer, they have helped many hearing loss sufferers around the work maintain their cognitive health through improved hearing.

To find out if you need hearing aids, we recommend regular hearing tests for those over the age of 55 because early diagnosis is the key to a healthy mind and to avoid cognitive loss. Contact us today to learn more, take a test, and receive help finding the best hearing aid for you.