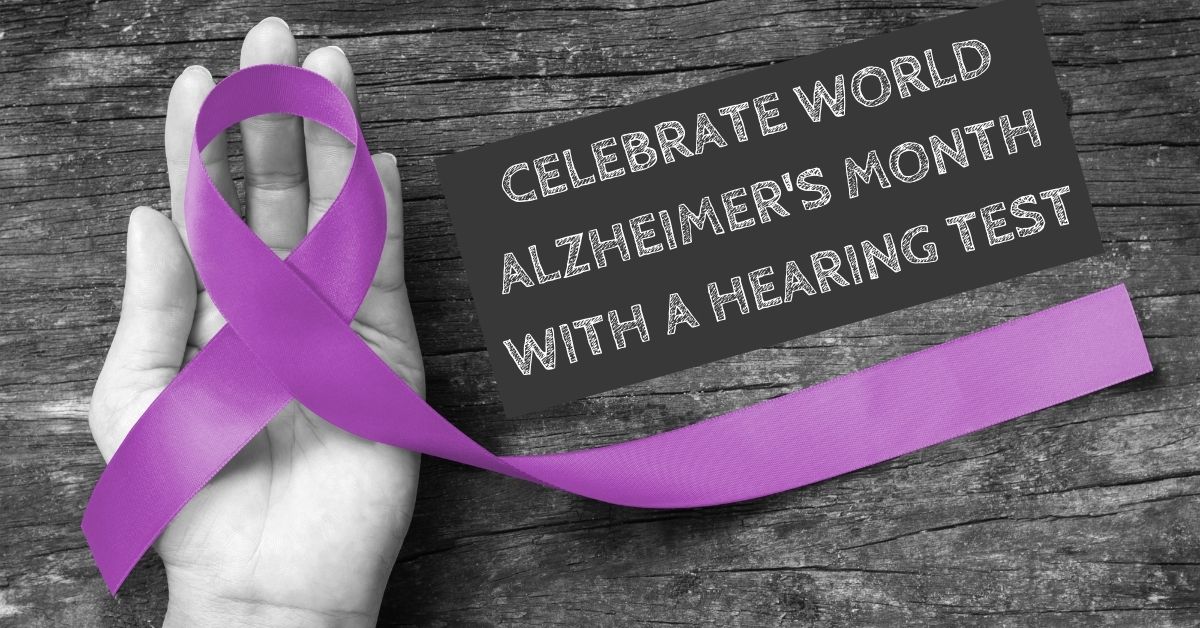 September is World Alzheimer’s Month! Launched in 2012, this month is dedicated to raising awareness about this chronic disease. This global campaign – with September 21st marking World Alzheimer’s day every year – addresses the stigma and misconceptions about Alzheimer’s and highlights how pervasive this health condition is. It also focuses on the action(s) people can take to be proactive about their health. One way people can reduce their risk of cognitive decline is by identifying and treating health loss. The best way to do this is to schedule an appointment for a hearing test!

Alzheimer’s disease is the most common type of dementia that people experience. Dementia refers to several medical conditions that are characterized by reduced cognitive ability – memory loss, difficulty focusing, remembering, making decisions, problem solving etc. Forms of dementia include Parkinson’s, Lewy body, vascular, and frontotemporal. Alzheimer’s accounts for 60-80% of all cases of dementia and is the most severe form. It is a disease that progresses gradually and as the Alzheimer’s Association describes, “in its early stages, memory loss is mild, but with late-stage Alzheimer’s, individuals lose the ability to carry on a conversation and respond to their environment.”

Nearly 6 million people have Alzheimer’s in the U.S. Key statistics include:

Much research has identified hearing loss as a factor that contributes to the development of dementia. Another chronic health condition, hearing loss impacts over 40 million people. Nearly 1 in 8 people have some degree of impaired hearing. Older adults are disproportionately impacted:

Impaired hearing is the reduced ability to hear and process sound which can severely strain communication, impacting all aspects of one’s life. Numerous studies show that people with hearing loss are more likely to experience dementia.

In a significant study published in 2019, researchers at Brigham and Women’s Hospital and Harvard Medical School investigated the link between both conditions. They examined data from an 8-year study which collected self-reported information on hearing loss and cognitive function. Including over 10,000 participants who were 62 and above, finds showed that cognitive decline was:

These findings reveal that not only is cognitive decline more likely if you have hearing loss, but also that the likelihood increases in accordance with the severity of the hearing loss.

Though the two conditions are correlated, it is unknown how exactly hearing loss contributes to cognitive decline. Researchers have suggested a few ways:

An incredibly useful way to reduce your risk of Alzheimer’s and other forms of dementia is to have your hearing assessed.

Hearing loss typically happens gradually so a person may not even notice changes for quite some time! This is why it is important for people to have their hearing assessed regularly, especially if you are an older adult.

This is relatively simple and starts by scheduling an appointment for a hearing test. Conducted by our team of hearing health specialists, hearing tests are noninvasive and painless! They involve an easy process that identifies any impairment, the degree, and specific type. This informs the most effective treatment option to meet your specific hearing needs.

The most common treatment is hearing aids which are electronic devices that are designed to absorb, amplify, and process sound which drastically increases one’s ability to hear. A hearing test can significantly improve your health, reduce your risk of various diseases such as Alzheimer’s disease, and enhance your quality of life!